In promotional advertisements for Trump University the instructors were called “professors.” Was Trump Involved in the School?

Trump had a 93 percent ownership stake, according to court documents. After that Trump had little to do with the school.

In a deposition he confirmed he had nothing to do with the selection process of instructors who taught at the school’s events or mentors for the school’s “Gold Elite” programs.

Michael Sexton, who ran the school, testified Trump did have direct involvement in one part of the program — advertising.

“He personally approved all the ads that were in newspapers,” Sexton testified.

According to court documents it was something that more resembled the way timeshares are sold — get people in the door and persuade them to buy for as much as possible.

Sworn testimony from a former Trump University manager said he believed it was a “fraudulent scheme” that “preyed upon the elderly and uneducated to separate them from their money.”

Students and affidavits filed by students, describe that during the three day session they were encouraged to call their credit card companies and ask for a higher credit limit so that they could use the money to invest in new houses.

However, “…when people said they didn’t have enough money to pay for the Trump Elite programs, [the instructor] suggested using the newly increased credit card limit…” according to one court affidavit.

Participants say they were told they would be a part of “a family” and that there would be a hotline they could access for advice.

But the Trump University president said in court papers, “We don’t have a hotline that students can call in and get their questions answered.”

Students were told they would have access to “hard money lenders” who could provide them the investing money to buy houses and flip them. However, list they were given was publicly available.

Some students were also told they would make the money back. One instructor told a student she would make $25,000 back in 60 days, according to an affidavit filed with the court.

I don’t believe it was really that high pressure.

Yes it was. Sales associates were instructed to overcome objections, or “excuses,” even if “buyers” were unsure and wanted to talk to their spouses…

Sure, sure, go ahead and talk to your spouse

Sales associates even had scripts on how to deal with people who were already overburdened with debt:

What did the instructors teach?

It didn’t matter. Trump University “Playbooks,” which were part of the court documents, show the principal goal was to sell, not educate.

The idea was to get “buyers” in the door for a 90-minute seminar, where Trump U. sales associates used high-pressure tactics to try and get prospects to shell out as much as they could — $1,500 for a three-day event, then anywhere from $10,000 to $35,000 for bronze, silver and gold packages. 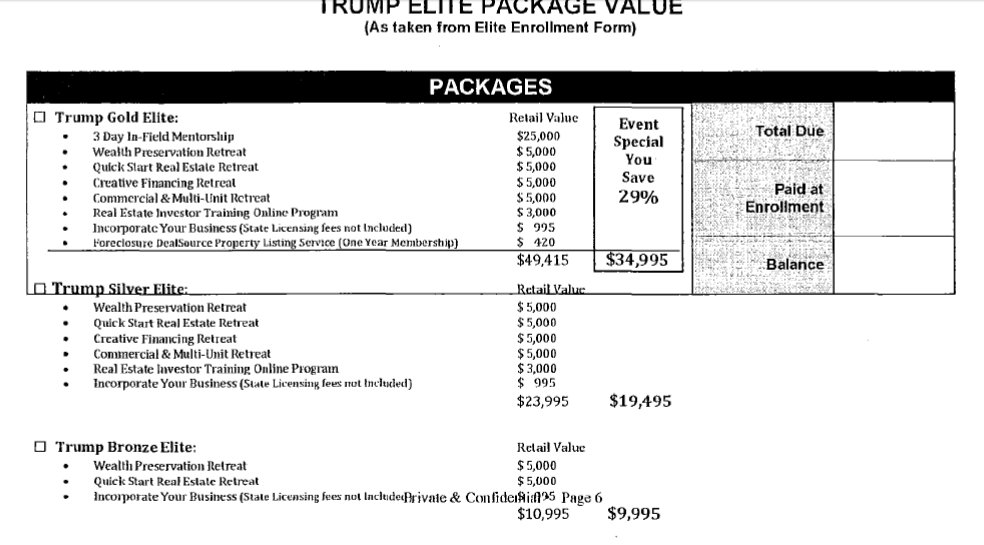 Here’s what your money got you at Trump U. $35K for 3-day “mentorship”

The big thing buyers/students got from the gold package was three-day, in-person consulting from an expert in the industry.

Were the professors industry experts and hand picked by Donald Trump, as he promised?

No. They were hired motivational speakers with limited-to-none real estate background and not picked by Trump. In a deposition in the Cohen case last December, Trump suggested under oath that he was not very involved in hiring instructors, despite the program’s promotional materials suggesting otherwise and his lawyers asserting he was “very involved.” Rather, Trump said, “I would see résumés. … I told [Trump University’s president] I want very good people.” He also said he did not personally select instructors for 2009 live seminars. Trump also said that he had not hand-picked them — or even knew them, really. Some of the names sounded “familiar, but it’s too many years,” he said.

In a recently released deposition taken on July 25, 2012, Michael Sexton who ran the school, stated under oath: “None of our instructors at the live events were handpicked by Donald Trump.”

What were the Trump secrets that were shared?

Course material was written by people who had done prior real estate coaching or business teaching, not Trump.

CBS News found one workbook was written by a company, Prosper Inc. in Utah known as a “boiler room” that called people at home to pitch them Trump University.

Another curriculum developer was David Early, whose business creates coaching materials, according to the New York State Attorney General.

Under oath Michael Sexton, who ran the school, confirmed Trump’s lack of involvement in producing or reviewing the material used in the workshops. And on the specific promise of teaching Donald Trump’s “proven secrets” in real estate, Sexton testified that the course taught strategies on how to invest in foreclosures, which Trump has used in the past.

Did Trump University teach students to take advantage of the 2008 housing crisis?

Yes. Trump University promised in 2009 that its ‘Fast Track to Foreclosure Investing’ would teach students how to take advantage of the crisis, according to university documents unsealed last week in a lawsuit against the now-defunct program. … A Trump University advertisement released in the case said one of its free investor workshops would explain how to ‘Cash in on one of the greatest property liquidations in history!’

“Trump University instructors were to teach students how to ‘capitalize without harm’ and find ways for ‘sellers to move on without shame,’ according to a December 2008 summary of the seminar.”

Bad credit, no credit, heck, no money? No problem.

What do they say about something sounding too good…?

Did Trump University have a A+ rating from the Better Business Bureau, as Trump claims in his defense?

Yes. Trump University introduced itself to potential customers with advertisements on radio and television, and in newspapers. The ads promoted a free, two-hour real estate seminar and a chance to learn Trump’s strategies. 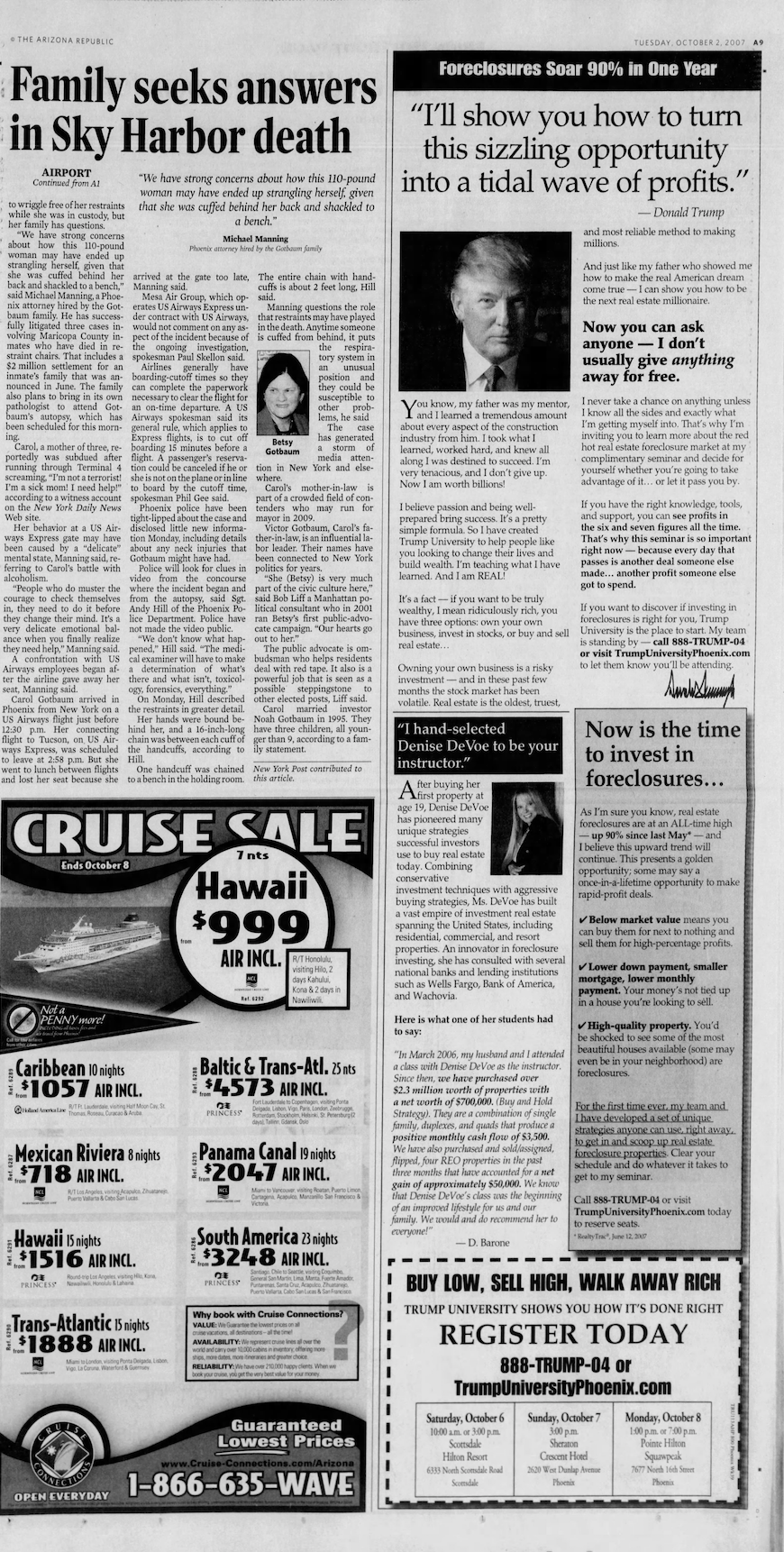 In promotional videos Trump claimed that Trump University would have hand-picked professors who were successful, terrific brains, and the best-of-the-best. As we pointed out earlier Trump University hired motivational speakers with limited-to-none real estate background and not picked by Trump.

Trump claimed his University would offer an equal or better education with a less expensive and shorter curriculum.

What About the 98% Approval Rating?

That’s based on 98 percent of the surveys being positive. The surveys are mostly from the last day of the three day $1,500 seminar which 5,950 people attended. As FactCheck.org points out, “one of the class-action lawsuits alleges that the surveys were filled out under pressure or with the expectation that participants would receive additional benefits in the future.”

The court documents show that if there was anything less than a 90 percent positive score, that associates could be reprimanded. That could lead some associates to lean on participants to write positive ones.

Any surveys below 90% at Trump U meant potential trouble for staff.