President Trump Called The Sun “Fake News”. But The Tabloid Quoted Him Accurately. US president Donald Trump has labelled Murdoch tabloid the Sun “fake news” for its publication of an exclusive interview, despite the newspaper conducting the interview on the record and accurately quoting him.

In a press conference alongside Theresa May at Chequers on Friday, Trump tried to contain the fallout after his comments criticising the prime minister’s proposed Brexit deal, which had run in Friday’s edition of the newspaper.

“I said tremendous things. Fortunately we tend to record stories now so we have it, so we can have it for your enjoyment if you’d like it.

“We record when we deal with reporters – it’s called ‘fake news’.”

The Sun’s interview was conducted by political editor Tom Newton Dunn in Brussels on Wednesday, with Trump’s praise for the prime minister included both online and on page 2 of the newspaper. 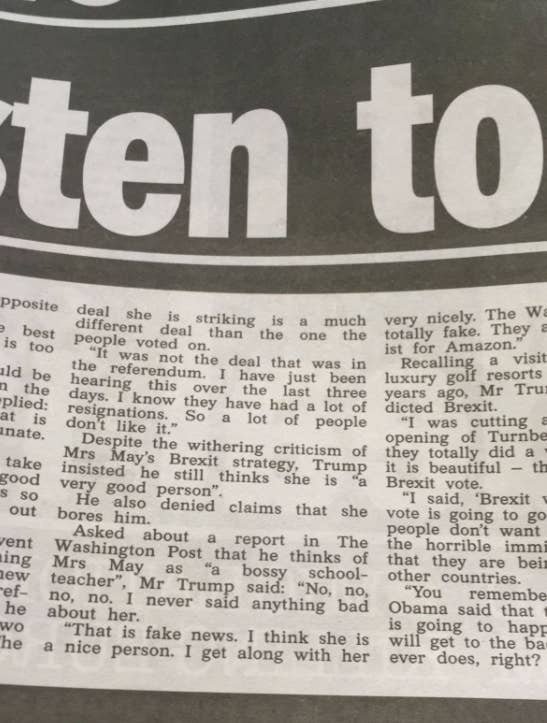 udio of Trump’s comments has also been published online since the interview went live. Later in the press conference, Trump was told the Sun’s political editor was among the journalists gathered and went on to ask him whether he’d praised May during the interview.

“Did I say nice things about Theresa May, please?” Trump said, with the camera panning around to Newton Dunn, who was nodding.

He said he apologised to the prime minister on Friday morning, claiming May was dismissive of the Sun interview.

“I want to apologise, because I said such nice things,” Trump said. “She said, ‘Don’t worry, it’s only the press.'”

"It was quite an extraordinary 28 minutes … he talks straight," says Tom Newton Dunn, The Sun reporter who sat down with Trump for a bombshell interview ahead of the President's meeting with Theresa May https://t.co/lqSUUXMbAE https://t.co/OO5Ev5Sx43

In response, the Sun issued a statement that both said the newspaper stood by the publication of the interview and seemed to defend Trump’s “fake news” outburst from his critics.

“We stand by our reporting and the quotes we used – including those where the President was positive about the Prime Minister, in both the paper and in our audio – and we’re delighted that the President essentially retracted his original charge against the paper later in the press conference,” a Sun spokesperson said.

“To say the President used ‘fake news’ with any serious intent is, well… ‘fake news’.”

The newspaper had led its coverage of the Trump interview with the president’s scathing assessment of May’s Brexit handling and a future possible trade deal, with the front-page headline: “May has wrecked Brexit… US deal is off!”

According to the Sun interview, Trump said he would have taken the “opposite” of May’s approach and suggested the prime minister’s current plan would “kill” off a trade deal between the US and UK.

“I would have done it much differently,” Trump said. “I actually told Theresa May how to do it, but she didn’t listen to me.”

On Friday afternoon, standing alongside May, Trump walked back his comments.

“Once the Brexit process has concluded and perhaps the UK has left the EU, I don’t know what they’re going to do, but whatever you do is OK with me, that’s your decision,” Trump said.

“Whatever you’re going to do is OK with us. Just make sure we can trade together.”

Attacking the media was a feature of the Friday press conference at Chequers, with Trump’s “fake news” slur of the Sun not the only instance where the president complained about reporters and specific outlets.

Unhappy with a question about his upcoming meeting with Russian president Vladimir Putin, Trump called an NBC reporter’s question “dishonest” and said her network was “possibly worse than CNN”.

He also snubbed a CNN reporter, yelling “CNN is fake news and I don’t take questions from CNN,” as May grimaced alongside him.

Here is the audio of Trump’s interview with The Sun.