Donald Trump has stood by his decades-old claim that the group of five men blamed for a 1989 rape and beating in Central Park before being exonerated were actually guilty.

In a statement to CNN as part of a retrospective on the case, the Republican presidential nominee maintained, despite DNA and other evidence to the contrary, that the men were guilty of raping and beating an investment banker who had been jogging in Central Park at night.

“They admitted they were guilty,” Trump said. “The police doing the original investigation say they were guilty. The fact that that case was settled with so much evidence against them is outrageous. And the woman, so badly injured, will never be the same.”

The five men, who became known as the Central Park Five, were exonerated in 2002 when an investigation by the Manhattan district attorney found DNA evidence linking the vicious crime to a previously convicted rapist. That man admitted to acting alone in the crime.

New York City settled with the five men in 2014, agreeing to pay them a collective $40 million for time spent wrongfully convicted and imprisoned. The hasty conviction of the men, who were ages 14 to 16 at the time, was widely viewed as a symptom of racial biases and the pressure prosecutors and law enforcement felt to find culprits amid fear of crime in the city amid a spiraling crime rate.

Trump, then as now a prominent Manhattan real-estate figure, took out a full-page ad in The New York Times shortly after the jogger was attacked calling for New York to revive the death penalty. 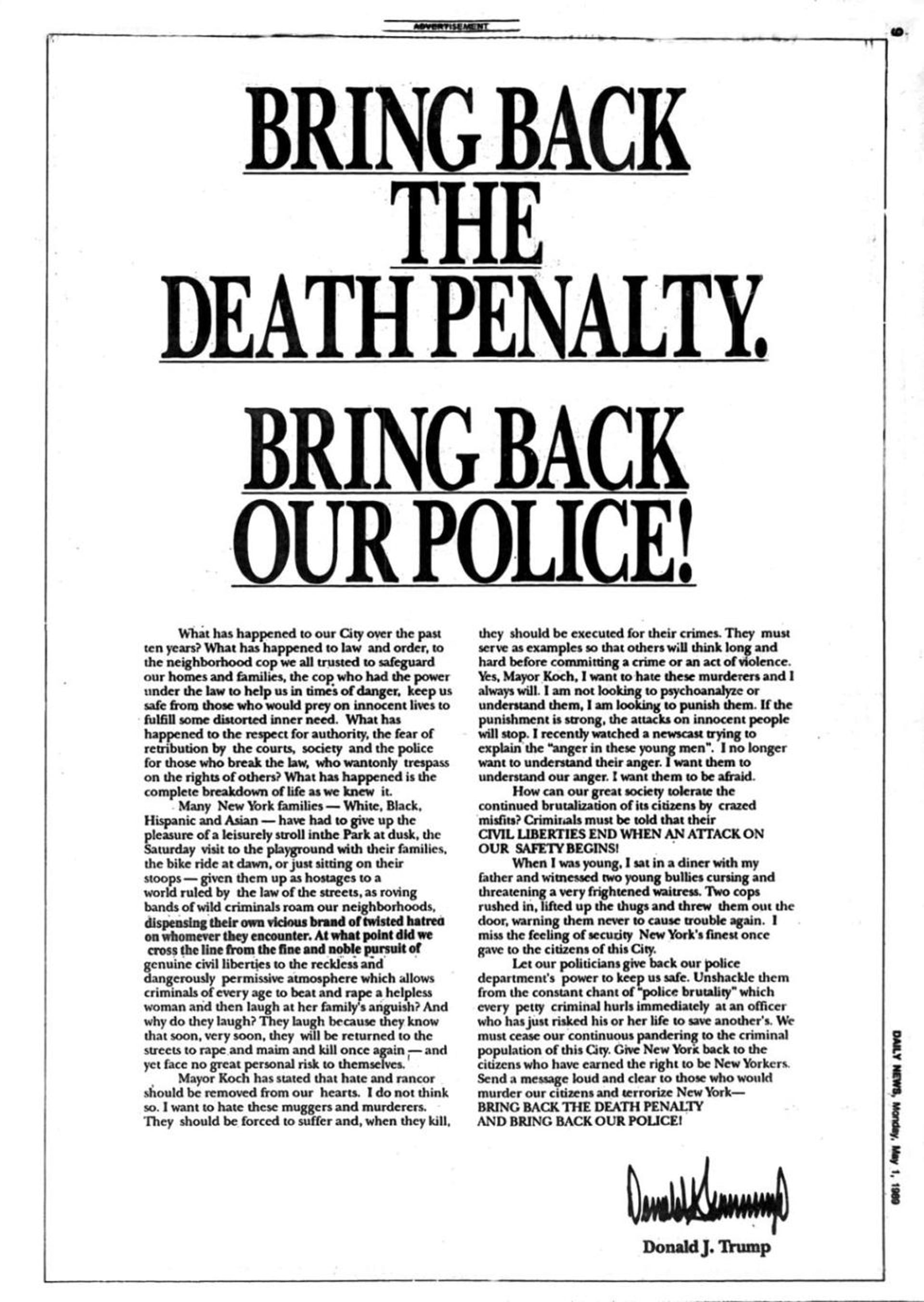 “I want to hate these muggers and murderers,” Trump wrote. “They should be forced to suffer and, when they kill, they should be executed for their crimes. They must serve as examples so that others will think long and hard before committing a crime or an act of violence.”

Trump also previously complained in an op-ed article in the New York Daily News that the settlement between the five men and New York was a “disgrace,” saying the “recipients must be laughing out loud at the stupidity of the city” to settle for an amount as high as $40 million.

Trump’s campaign has previously defended his demonization of the wrongfully convicted men.

Sen. Jeff Sessions of Alabama, an adviser to Trump’s campaign, touted the ad earlier this year during an interview with an Alabama radio station, saying that it showed Trump was committed to law and order.

“Trump has always been this way,” Sessions said. “People say he wasn’t a conservative, but he bought an ad 20 years ago in The New York Times calling for the death penalty. How many people in New York, that liberal bastion, were willing to do something like that?”

Donald Trump called for, and still today is calling for, the execution of five men for a crime they didn’t commit. How is that for “law and order?”

The case was notable for its racial politics: Four of the Central Park Five were black and one was Latino while the victim was a white banker.