The president-elect, who takes office next month, said the US must take such action “until such time as the world comes to its senses regarding nukes”.

The US has 7,100 nuclear weapons and Russia has 7,300, according to the US nonpartisan Arms Control Association. 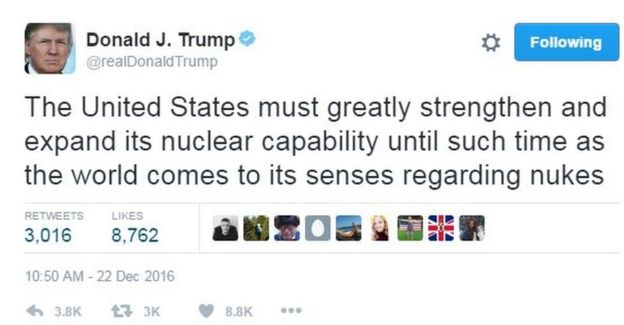 Mr Trump’s announcement, which came via Twitter, was published in a string of several tweets on Thursday morning.

Mr Trump also wrote to criticize a resolution being considered at the UN and to reiterate his vow to “drain the swamp” – a reference to corruption in Washington DC.

His tweet came only hours after President Putin met with his military advisers to recap Russian military activities in 2016.

“We need to strengthen the military potential of strategic nuclear forces, especially with missile complexes that can reliably penetrate any existing and prospective missile defence systems,” Mr Putin said.

Russia, he added “must carefully monitor any changes in the balance of power and in the political-military situation in the world, especially along Russian borders”, possibly referring to US missile defenses in eastern Europe which the Pentagon says are to counter Iran.

During Mr Trump’s campaign he referred to nuclear proliferation as the “single biggest problem” facing the world, but also said he could not rule out using nuclear weapons against Europe.

Mr Trump’s defeated Democratic rival Hillary Clinton repeatedly cast her opponent during the campaign as too erratic and lacking in the diplomatic skills required to avoid a nuclear war.

She mocked him by saying “a man who can be provoked by a tweet should not have his fingers anywhere near the nuclear codes”.

This is a radical departure from President Obama’s current policy.

Mr Trump has offered no further details on his plans but he has hinted in the past that he favored an expansion of the nuclear program.

He was asked in interviews whether he would use weapons of mass destruction against an enemy and he said that it would be an absolute last stance, but he added that he would want to be unpredictable.

In contrast, President Obama has talked of the US commitment to seek peace and security without nuclear weapons.

He has sought to reduce the nation’s arsenal of nearly 5,000 warheads in favor of more special operations forces and precise tactical strikes.

But in 29 days the nuclear codes and the nation’s defense policy will no longer be in his hands.

In interviews before his surprise victory Mr Trump said that other countries should spend more on their own defense budgets, and forgo US protection, because “we can’t afford to do it anymore”.

He has said he is in favor of countries such as Japan and South Korea developing nuclear weapons “because it’s going to happen anyway”.

“It’s only a question of time,” he told the New York Timed editorial board, adding that “they’re going to start having them or we have to get rid of them entirely.”

Mr Trump is spending the festive season at his Mar-a-Lago resort in Florida, where he has been meeting with campaign advisers.

You have two men covered in gasoline who want to kill each other. One has two matches, the other has three. Is the one with three any safer than the one with two? Donald Trump thinks so.