A Dangerous Troll Is Now Reporting From The White House The internet’s most hapless political blogger now has his own White House correspondent — a regular contributor with little reporting experience but ample ties to “alt-right” harassment — sitting in the White House press briefing room.

At the January 19 “Deploraball” event before President Donald Trump’s inauguration, Gateway Pundit founder and “dumbest man on the internet” Jim Hoft announced that his outlet would have a White House correspondent with the Trump administration, and that Lucian Wintrich would fill the position. On February 13, Hoft posted a “reader alert” that Hoft and Wintrich will be attending the day’s White House press briefing. Hoft confusingly wrote, “Please look for us and keep your fingers crossed that one of us is asked a question.”

Hours later, Hoft tweeted a photo of himself and Wintrich standing behind the lectern in the White House press briefing room, displaying a hand signal associated with the racist “Pepe” meme. The tweet itself also included the hashtag “Pepe” and a frog emoji, commonly understood to invoke the hate symbol. 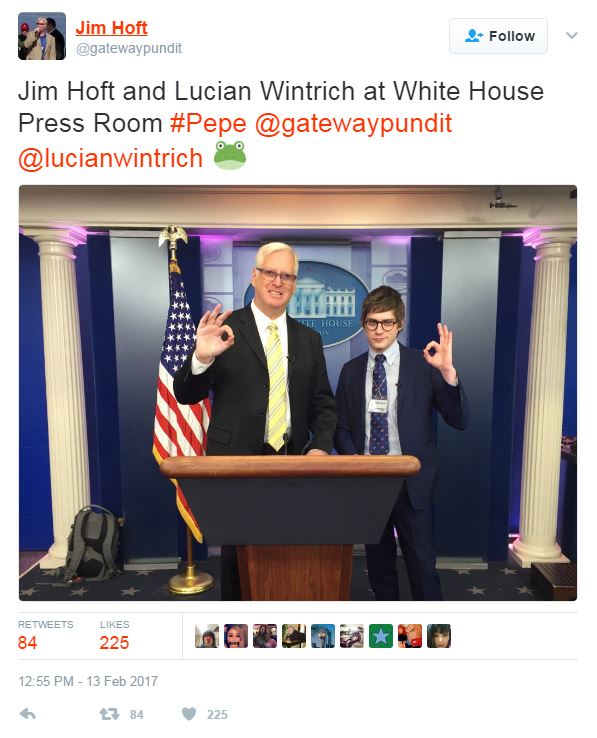 Referencing this Pepe the Frog meme: Hoft’s political blog has often served as the single source for completely unfounded reporting that nonetheless catches fire in the right-wing internet world, until it becomes what Kellyanne Conway might deem an “alternative fact.” The frequency with which he posts hoaxes and complete fabrications as fact suggests Hoft either has a reckless and total disregard for the truth or is so incompetent he cannot separate fact from fiction.

Most recently, Hoft’s total negligence for the truth led to an internet harassment campaign against Washington Post home-page editor Doris Truong, who he wrongly reported was captured taking secret photos of Rex Tillerson’s notes at his confirmation hearing for secretary of state on January 11. Truong was not at the hearing; she is, however, an Asian-American woman (like the person photographed at the hearing), and that was seemingly enough for Hoft to run with. Truong had already been subjected to extensive racist trolling by the time Hoft quietly corrected his post. This is Hoft’s pattern: decide what a random photo or document means without obtaining any supporting evidence, post it as factual news, watch the “alternative fact” spread, quietly change the post or claim yet another mistake, then repeat.

The Gateway Pundit’s new White House correspondent is now attending press briefings, and it’s unclear how “brand strategist and digital creative” Lucian Wintrich, who frequently refers to the new president endearingly as “daddy,” will approach this responsibility. If his past actions and social media persona are any indication, Wintrich will follow the Gateway Pundit formula for irresponsible and dangerous reporting, and perhaps even more explicitly incite harassment from his new White House platform.

Wintrich Is Not A Reporter

Wintrich is a “gay conservative mouthpiece” primarily known as the artist behind a “Twinks4Trump” photography exhibit that debuted at the GOP convention last summer. He explained that he aims to be “the first rational voice that the American people have had in White House press in ages.” He recently wrote on social media, “I don’t consider myself a journalist, I consider myself the future of journalism.”

Indeed, Wintrich does not appear to have much experience as a political reporter prior to joining The Gateway Pundit; a Nexis search of his name for the last five years reveals only a handful of articles in which he is quoted, and no bylined pieces. He has authored one opinion piece, describing his pro-Trump art, posted on The Hill last fall. Wintrich has now written about a dozen posts for The Gateway Pundit in the past few weeks; he was previously the subject of several posts on the blog, as well as on Breitbart.com, before beginning this correspondent position.

Wintrich is also the founder and “creative director” of Rabble Media, which bills itself as “a new type of media brand providing its audience with original reporting, underserved stories, interesting perspectives, thought-provoking proposals and occasionally, breaking news.” Wintrich says he launched Rabble in late summer; the site appears to have stopped posting articles at the end of September.

Wintrich’s experience as a writer seems to have begun with his tongue-in-cheek approach to personal harassment in college. According to a VICE profile of Wintrich, “his writings were rejected by the student newspaper” at Bard College while he was a student there, so Wintrich subsequently started a rival blog, which posted an anonymously written column referring to a fellow student’s vagina as “cold and damp” and linking to her personal Facebook page. VICE noted that “Wintrich claims that a lawyer for the school told him that his blog was perceived as a sexual threat, though he doesn’t recall why. ‘I think there was a joke about a vagina or something. It was infantile. I totally forget it.’”

Wintrich Seems To Thrive At The Misogynist “Alt-Right” Harassment Nexus

Here’s what else we know about Wintrich: He is close with figures of the racist and misogynist so-called “alt-right” who are known for launching online harassment campaigns that frequently target women. Wintrich’s art exhibit featured “contributors” like Breitbart.com editor and transphobic serial harasser Milo Yiannopoulos, “Pharma bro” Martin Shkreli, misogynist and racist conservative troll Gavin McInnes, and deluded “citizen journalist” vigilante James O’Keefe, among others, when he brought it to New York City in October. “We’re bringing back the Rat Pack,” Wintrich captioned a photo of Shkreli, himself, and Yiannopoulos. This group also regularly tweets about and directly at each other, praising and participating in one another’s misguided projects.

Wintrich himself has also encouraged harassment of individuals on Twitter, posting Gizmodo writer William Turton’s personal information after Turton wrote a post criticizing pro-Trump Silicon Valley billionaire Peter Thiel’s business partner. Wintrich has since deleted his tweet about Turton, which listed Turton’s personal address, phone number, and email. It read, “I think that [Turton] would love a call about what you think of his villainization of Trump supporters and attacks against Thiel.” Wintrich has also repeatedly tweeted photos of Mic.com writer Jack Smith, attempting to connect Smith to the dangerous #Pizzagate conspiracy theory and tweeting, “Someone needs to investigate.” According to Wintrich, Smith’s reporting on Wintrich’s art show may have led an LGBT veterans group to reject a potential donation Wintrich planned to make from the show’s proceeds.

Wintrich’s Social Media Is Riddled With “Jokes” About Women’s Equality, The Transgender Community, And Sexual Assault

Wintrich’s Twitter account has included disparaging comments about women and hate rhetoric aimed at transgender individuals, as well as jokes about sexual assault:

One more of these asinine #debate questions, and Donald Trump needs to grab Anderson Cooper by the pussy.

.@la_baumgart do you even date trans, or just pretend to until they choppy chop?

Can we just register 'conservative' as a 'gender identity' so libs get too confused to keep trying to argue with us?

He's hitting it out of the park this week! pic.twitter.com/LVMuqjzNgL

"TRUMP IS PRESIDENT?!?! WTF GET ME A PINK SHIRT AND A SELF-RIGHTEOUS PLACARD" – Everyone at the Women's March rn.

This is why women's suffrage was one of the country's largest disasters. pic.twitter.com/CWPMBGzTav

Rather than 'manspreading' on the subway, can we examine 'fatwomanspreading'? cuz rn I'm between two broads who made that their occupation.

Fuck the 60-year-old fat broad sitting at the front of @GOPWomen_WNRC who thought I was a liberal operative.